The day 2 keynote started with an in depth discussion of Cloud Spanner, as mentioned previously. AWS and Azure provide highly scalable and highly tunable NoSQL services in the form of DynamoDB etc, but when it comes to more traditional “meat and potatoes” RDBMS solutions, they are constrained by the limitations of the products they use, such as MySQL, SQL Server, Postgres, etc.

Cloud Spanner is different as it is a fully scalable RDBMS solution the cloud that offers all the same benefits as the NoSQL solutions in Azure and AWS. Much of the complexity of sharding the database and replicating it globally has been taken care of within Cloud Spanner. Automatic tuning is also done over time by background algorithms.

Cloud Spanner will be GA’d on May 16th and well worth a look if you have ACID database requirements at scale.

A representative from The Telegraph was brought up to discuss how GC’s data solutions allow them to perform very precise consumer targeting using analytics. It was also worth noting that they are a multi-cloud environment, using best of breed tools depending on the use case. Rare and ballsy!

An example of the powerful Google APIs available was then demonstrated by a UK startup called Seenit. They use the Google Video Intelligence API to automatically tag videos that are uploaded to their service. Shazam then came up on stage to discuss their use of the Google Cloud platform and to share some of the numbers they have for their service. 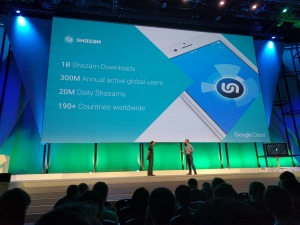 As you can see from the picture above, there have been over a billion downloads for the app and more than 300 million daily active users. Those numbers take some processing! One of the key takeaways for Shazam was that in some cases, traffic spikes can be predicted, such as at a major sporting event or during a Black Friday sale. This is less the case with Shazam, so they have to have an underlying platform that can be resilient to these spikes.

There was a demo of GPU usage in the cloud, around the use case of rendering video. The key benefit of cloud GPU is that you can harness massive scalability at a fraction of the cost it would take to provision your own kit. Not only that, but consumption based charging means that you only pay for what you use, making it a highly cost effective option.

For the final demo of the keynote, there was a show and tell around changes coming to G Suite. This includes Hangouts, which has had some major engineering done to it. It will support call in delegates, a Green Room to hold attendees before the meeting starts and also the support for a new device called the Jamboard. This is a touch screen whiteboard that can be shared with delegates in the Hangouts meeting who can also interact with the virtual whiteboard, making it a team interactive session. Jamboards are still not available, but expect them to cost a few thousand pounds/dollars on release.

One of the new aspects of G Suite that I liked was the addition of bots and natural language support. Bots are integrated with Hangouts so that you can assign a project task to a team member, or you can use the bot to find the next free meeting slot for all delegates, all of which takes time in the real world.

Natural language support was demonstrated in Sheets, whereby a user wanted to apply a particular formula but didn’t know how. By expressing what they wanted to do in natural language, Sheets was able to construct a complex formula that achieved these results in a split second, again illustrating the value of the powerful Google APIs.

A final demo was given by another UK startup called Ravelin. They have a service that detects fraud in financial transactions using powerful Machine Learning techniques. They then draw heat maps of suspected fraud activity and this can at a glance show parts of the country where fraud is most likely.

The service sits in the workflow for online payments and can return positive or negative results in milliseconds, thus not delaying the checkout process for the end consumer. Really impressive stuff!

More security and compliance in the cloud

After the keynote, I went to the first breakout of the day which was about security and compliance. This did not just cover GCP but also mobile as well. A Google service called Safety Net makes 400 million checks a day against devices to help prevent attacks and data leaks. This is leveraged by Google Play, whose payment platform serves 1 billion users worldwide.

One stat that blew me away was that 99% of all exploits happen a year after the CVE was published. This is a bit of a damning statement and shows that security and patching is still not treated seriously enough. On the other side of the coin, Android still has a lot to do in this area, so in some respects I thought it was a bit rich of Google to point fingers.

Are you the weakest link?

Google has 15 regions and 100 POPs in 33 countries, with a global fibre network backbone that carries a third of all internet traffic daily. The Google Peering website has more information on the global network and is worth a visit. Google really emphasised their desire to be the securest cloud provider possible by noting that they have 700+ security researchers and have published 160 academic security white papers. Phishing is still the most common way of delivering malicious payloads.

DLP is now available for both GMail and Drive, meaning the leak of data to unauthorised sources can now be prevented. There is also support for FIDO approved tokens, which are USB sticks with a fingerprint scanner on board. These are fairly cheap and provide an additional layer of security. The session wrapped with announcements around expiring access and IRM support for Drive, S/MIME support for Gmail and third party apps white listing for G Suite.

To mention GDPR  – Google have stated that you are the data controller and Google are the data processor. Google has certified all infrastructure for FedRAMP, only provider to do that. Although FedRAMP doesn’t apply outside of the US, there may be cases where this level of certification will be useful to show security compliance.

My next breakout was on GC networking. I have to say that as a rule, the way GC does this is very similar to AWS with VPC and subnet constructs, along with load balancing capabilities. Load balancing comes in three main flavours – HTTP(S), SSL and TCP Proxy. You can also have both internal and external load balancing.

Load balancing can be globally distributed, to help enable high availability and good levels of resilience. This uses IP AnyCast to achieve this functionality. IPv6 is now supported on load balancers, but you can only have one address type to each load balancer. In respect of CDN, there is a Google CDN, but you can also use third party CDN providers such as Akamai or Fastly.

Fastly took part in the breakout to explain how their solution works. It adds a layer of scalability and also performance on top of public cloud providers. It is custom code written by Fastly to determine optimal routes for network traffic globally. I’m sure it does a lot more than that, so feel free to check them out.

Andromeda is the name of the SDN written by Google to control all networking functions. There is a 60Gbps link between VMs in the same region and live migration of VMs is available (unique to GC at the time of writing). GCP firewalls are stateful, accept ingress/egress rules and deny is the default unless overridden.

DDos protection at layer 3 and 4 with Cloud CDN and Load Balancer, with third party appliances supported (Checkpoint, Palo Alto, F5, etc.). Identity Aware Proxy can be used to create ACLs for access to external and internal sites using G Suite credentials. In respect of VPCs, you can have a single VPC that can be used globally and also shared with other organisations. VPCs have expandable IP address ranges, so you don’t need to decide up front how many addresses you will need, this can be changed later.

There is private access to Google services from VPCs including cloud storage, so think of S3 endpoints in AWS and you’ll get the idea. Traffic does not traverse the public internet, but uses Google’s network backbone. You can access any region from a single interconnect through Google’s network (think Direct Connect or ExpressRoute).

Like Azure and AWS, VPC network peering is available. VMs support multi NICs and you can have 10 NICs per VM. XPNs define cross project networking and you can have shareable central network admin, shared VPN, fine grained IAM controls and the Cloud Router supports BGP. Finally, in terms of high bandwidth/low latency connections, you can have a direct connection to Google with Partner interconnections also available.

To summarise, props to Google for a very good event. There was loads of technical deep dive content and if I had one criticism, it would be that the exhibition hall was a bit sparse, but I expect that will be addressed pretty quickly. In respect of functionality, I was pleasantly surprised with how much is currently available in GC.

Standouts for me include the VM charging model, VM sizing, live migration of VMs and added flexibility around the networking piece. It’s clear that Google want to position GC as having all the core stuff you’d expect, but with the availability of the APIs that help run the consumer side of Google, with some massively powerful APIs available.

This site uses Akismet to reduce spam. Learn how your comment data is processed.