Yesterday was the summer get together of the North West England VMUG chapter at Rosylee in Manchester. A somewhat quirky venue, it offers an intimacy you don’t really get with other conference venues. We even had vRockstar Duncan Epping with us for the first time to cover off the latest and greatest in Virtual SAN. He seemed to like the venue too!

At the @NWEnglandVMUG… Awesome venue!

Although the event was planned as a vSphere 6.0 themed meeting, it seemed to err more towards the storage side of things. As well as event sponsors Pure Storage and Tegile, there were the usual sessions on “What’s New” and vNews. A new addition to the agenda was an “Ask the Experts” panel which seemed to work really well. Lots of questions about licencing! Anyway, without further ado.. 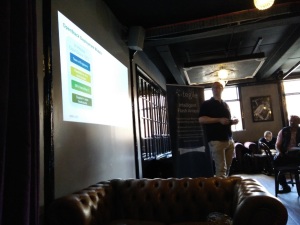 Long time chapter contributor Ashley Davies took us through the usual start of what’s new in the VMware world:- 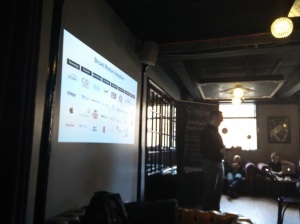 We then had a session with Tegile, who are a storage startup with a presence in the UK.  Main points of the presentation were:-

An interesting takeaway from the session was that the support/maintenance costs are flat across the five year term, making budgeting a whole lot easier. I’ve seen it previously where this figure can vary a great deal and really squeeze budgets. There is also an offer to replace the controllers in the array at the end of the five year term should you renew further past that. I didn’t note the full details, but I’d be happy to make any corrections where I’ve missed something off.

Next up was Matthew Steiner with a session on what’s new with vRealize Operations Manager 6.01 (the product formerly known as vCenter Operations Manager). Although I’ve only had a quick play with it, it seems my assumption that it wouldn’t be a big change from 5.x was quite a common mistake. Even Matt admitted it took him a little time to get used to some of the differences.

Key points from the session:-

Next was the session from VCDX and all round vRockstar Duncan Epping. He took us through the current status of the Virtual SAN product, it’s capabilities and use cases. There were also some important notes from the field around ensuring the hardware you use is HCL certified and you don’t just cobble together any old junk and expect it to fly like an eagle. To the sea, presumably. (My words, not his. Well, Peter Frampton’s words. Well, you get the idea.)

First up my sincere apologies to Pure Storage. I didn’t capture many notes about the company and the product as I had to take a phone call and missed the vast chunk of your session. If anyone wants to provide a brief summary or a link to the slide deck, I’d be happy to post it on this blog. As much as I got was the following:-

– All flash storage solution
– Gartner magic quadrant leader
– All Flash Array with consumer SSDs, always on encryption and dedupe from 2011
– FlashArray M is the new product. 6 watts per TB, reduced number of cables
– 100TB in 3U – Product designed and manufactured from the ground up, so Pure control not only the software but the hardware also which is unique with this type of solution

Next up was me! I was asked by Steve and Nathan (VMUG leaders) to do a presentation last year, but due to having to take a contract at short notice I had to let them down and I hated doing it. I was asked back a second time yesterday and delivered a session on VMware certification and the roadmap for version 6 of products. I hadn’t presented for a couple of years, and although a little apprehensive at the start, within a couple of minutes I got into my stride and actually felt fine. I think it probably helped that it wasn’t a presentation on storage!

A quick straw poll at the start of the session was really interesting. I asked for shows of hands as to who had VCA, VCP and VCAP. VCA had a few hands, VCP had lots of hands and VCAP had no hands! I was very surprised at this, I was expecting at least a couple! It seemed Duncan and I were the only two in the room that I could see.

Key takeaways from the session:-

– VCP certification has been going since 2003, there are now more than 100,000 worldwide
– VCAP introduced in 2010
– VCDX introduced in 2010, around 200 worldwide (of which Duncan is 007!)
– Traditionally, VCP requires one exam to pass the certification, but this requires the ICM course to be sat first
– As you rise up the “Pyramid of Power”, the bar goes higher and there are fewer candidates
– Differentiate yourself in the market by achieving higher levels of certification, pimp your LinkedIn profile – you have a 10 second window of opportunity to impress people looking at your profile!
– Traditionally, VCAP track has multiple skills (Cloud, DCV, Desktop) and design or admin tracks, this being simplified to Implementation Expert (VCIX). Two exams, one certification. Multiple VCIX grants “Elite Implementer” status which sadly current multiple VCAP holders can’t have!
– VCDX requires a panel defence of a design document, can result in hundreds of hours of work and can be expensive to get (£1500+)
– Achieving VCAP status helped me feel less intimidated about working with vRockstars at top partners such as Xtravirt, helps validate your skills to others
– VCP-NV (network virtualisation) exam is half price until the end of June
– If you plan on sitting an exam or two at VMworld, don’t bite off more than you can chew and leave yourself exhausted. VCAP exams are 3 hours plus

To finish off we had some vNews from Ashley Davies and a new addition to the agenda, “Ask the Experts” panel. There was a lot of good interaction between the panel and the audience, a few questions on licencing but a lot on Virtual SAN. Thanks to the VMware guys for doing this, and oiling them with a beer during the session obviously helped!

The next meeting is planned for Wednesday 9th September back at Rosylee, keep an eye on the chapter Twitter feed for further information.