I hadn’t realised it was so long since I last blogged. I feel the need at the moment due to my recent trip to India with work. I’m often on the road as part of the job, but every now and again fate deals you a great hand and you get to see things most mortals don’t. As such, I was invited to Novell’s India Developer Centre to meet the guys and gals who write ZENworks. For those not in the know, just be aware that it’s the vast piece of software I go around installing and cajoling the most 😉

I was extremely apprehensive before I went. I’ve only been outside of Europe a grand total of three times, and that was to head strictly west to North America, not east towards countries less well off than our own. That said, the journey did start with a trip on an Airbus A380, the largest passenger jet around. I was excited about this, as there aren’t too many around. Don’t think I’m being glib when I say it’s just like a plane but a lot bigger. I was a bit underwhelmed by the whole experience, but it did have really cool touch screens in the back of the seat with movies on demand, so I decided to watch “Unstoppable”, “The Expendables” (much better the second time around, though butchered for sensitive Arab audiences) and half of an amazing documentary called “Inside Job” (more about that later).

As you can’t get directly to Bangalore from Manchester, we had to go via Dubai. We got there about 1am local time, and I was surprised to see much huge crowds of folks around the terminal building. Apparently the place comes alive at night, and this was true. I also got greeted by the VIP service, who got me through a security fast lane, which was a total blur. Both times they met me (going out and coming back), the lady greeting me called me “Mr Chris”, which I found amusing in a cute kind of way!

The thing that struck me most during the week out there was that the Indians are lovely people who are almost congenitally nice to strangers. I don’t like talking down to people and I don’t like them talking down to me. I like to treat everyone as equal, but it was an odd sight to see hotel staff stop in the corridor as you approached them, put their hands behind their back and say “Good Morning/Afternoon” etc and not move until you passed them. I’ve stayed in hotels all over the UK and been called all kinds of things – “mate” “pal” (my least favourite, it has to be said) and I think I even got a “Guv” once in London, but in India it was always “Sir”.

The other thing that struck me is that although there is a lot of squalor and under privileged living, people just seem to get on with it. The roads are barmy, and lines are very much for illustrative purposes only. We went to the Bull Temple, which is a big deal for Indians. When local kids in there saw that we were UK and US tourists, they treated us like rock stars, wanting to shake our hand and say hello. All very affable, and not threatening at all. We did get besieged by beggars outside, and giving them 10 rupees made them eternally grateful. When I say that it’s 70 rupees to the pound, this gives you a bit of an idea of what the standard of living is like.

Kids play on mounds of rubbish and the rubbish trucks drop their loads on the side of the road wherever there is a gap – no separating paper, bottles and garden waste here! 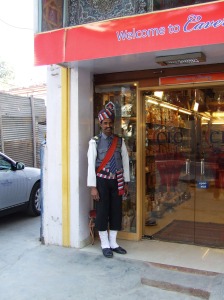 There’s a lot more to tell, but if you’re interested in the rest, head over to my Flickr set…

This site uses Akismet to reduce spam. Learn how your comment data is processed.